Last week, Dame Helen Mirren, the incomparably versatile actor known for playing both Queen Elizabeth I and II, received the 45thAnnual Film Society of Lincoln Center’s Chaplin Award. I was lucky enough to join the celebration with a birds-eye view from a seat in the back.

Helen is one of those actors who can do anything – plays, films, and TV – and she doesn’t stop. According to IMDb’s website, right now she’s filming two movies, and three are in post-production. Another TV series suitable for the Queen that she is, Catherine the Great, is in pre-production. Yeah, Helen!

The only disappointing no-show among the presenters was the 2016 award recipient, Morgan Freeman. If you haven’t seen them together in the spy thriller RED from 2010, rent it this weekend!

An Affectionate Handoff from Jeremy & Onward to the Podium:

Helen began her acceptance speech with her wild child in full force. Precisely what Jeremy Irons warned us about! She blurted out the F-word. She quickly apologized and thanked her presenters and described them as a perfect fantasy dinner party.

Helen confessed she hadn’t worked with DeNiro. ‘Only in my dreams!’ With so many professionals in the theatre and movie biz attending the ceremony, some directors and producers must have heard the message. If only they would act on it!

Helen explained she was a storyteller and how they matter. She has been a working artist for 67 years. Helen shared her unlikely entrance into acting. She met disappointment right away at an early age when she didn’t get any meaningful roles in school plays. Her household was modest, and she grew up without a television. Her family didn’t even go to the movies.

When she was 16, after working all day in her aunt’s B&B in Brighton, England, she went to see her first movie. This experience changed Helen with the mix of excitement, fear, and fascination. She recounted how stories live forever, films make them more permanent, and they matter.

The finale with Helen & her presenters posing for photos: 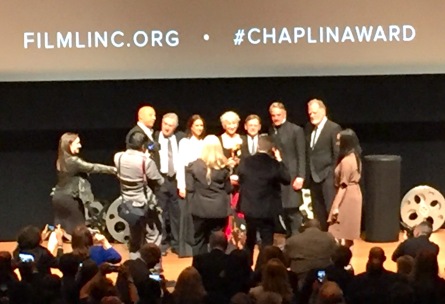 My husband and I used to be members of the Lincoln Film Society and attended a few of these Chaplin award ceremonies over the years. We enjoyed seeing some of our favorite actors receive the award and the specially choreographed film clips highlighting their career so far. You may have heard of them: Diane Keaton and Meryl Streep. If you are movie buff, check out their website to see which actor will win next year’s award and try to attend.

Helen’s award and recognition is another reason to rent, stream, or see her in a real movie theatre. Helen Mirren doing what she does best. One of my favorite films, Woman in Gold, and Helen’s biography, In the Frame: My Life in Words and Pictures, are available from Amazon. I don’t have a role for her in my novel Aquavit, but there are at least two roles she would be perfect for in my second to-be-published book. Wouldn’t that be something!