Across from the Philadelphia Museum of Art and the Rocky statue and steps, the Art Deco Perelman building annex holds the library and has edgy, fashion-forward exhibits. They’ve succeeded again with Off the Wall: American Art to Wear. The Latin root textere means to weave. Stories are usually communicated via written text, and clothing is typically made from … END_OF_DOCUMENT_TOKEN_TO_BE_REPLACED 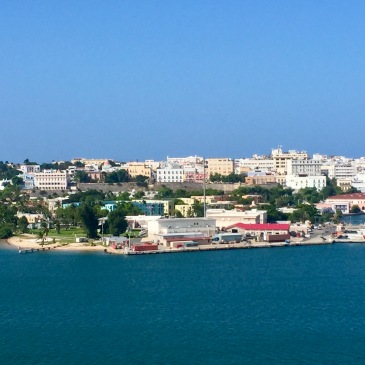 San Juan, Puerto Rico, is the busiest cruise ship port in the Caribbean. During a quick port stop, I was busy too checking out a couple of libraries. One had books, but sadly, the other didn’t.  Andrew Carnegie, the kick-starter king of libraries all over the world, must have predicted the importance of San Juan. … END_OF_DOCUMENT_TOKEN_TO_BE_REPLACED

Yes, there is a rebel faction in the Florida Sunshine State. In 1982, the city of Key West, at the southern tip of Florida, seceded from the Union. They created a micro-nation, The Conch Republic. The disagreement with the USA was over US Border Patrol roadblocks and checkpoints. This slowed everyone down, including important people … END_OF_DOCUMENT_TOKEN_TO_BE_REPLACED

Sure thing, ladies. I will seas the day! But can I borrow a tail first?
Mermaid & spouting turtle water fountain from 1898 on old clam shell. Now on display at PAFA. So beautiful.
Life at sea in a warm sunny spot. Doesn’t get much better than this!
I think I’ll go with yacht #1 at the top ,,, that is, if I got to choose! In pretty St Thomas, US Virgin Islands.
The mega cruiser Allure of the Seas. My home, along with another 8000 passengers & crew, last week!
The upscale & upprice seaborne sojourn in busiest Caribbean cruise port of San Juan, PR. One of these days my home at sea.
Now this is a fancy tattoo! Triton the son of Poseidon /King Neptune. Triton is also the mermaid Ariel’s dad. His mother is Salacia, the goddess of saltwater. She was afraid to marry King Neptune. But it worked out!
Homeward bound tattoo - notice how the sails lean to the right to home. Good luck sailor!
Cool book on tattoos - but not planning to get one! A clipper ship was a metaphor for life - smooth sailing but sometimes rough patches on your life voyage.
Happy Halloween from an eerie ghost ship made from light & water. What a voyage! #Aquavit & #Blueness
Beautiful catamaran filled with snorkelers in the Bahamas. Love the name: seahorse.
And who says mermaids aren’t busy working girls? She’s carrying one heck of a flower.