Highclere Castle, about two hours west of London, has one of the best private libraries I’ve ever seen. And you’ve seen it too, if you watched the popular TV series Downton Abbey. Highclere’s library contains over 5,000 books dating from the 16th century. The current castle, completed in 1878, is still owned by the family, the eighth Earl and the Countess of Carnarvon.

Lord Grantham in the Library (photo of video clip at exhibit):

A new exhibit recreating the house, history, and costumes from Downton Abbey is in New York City until the end of January. I wouldn’t be surprised if it travels to other cities afterward.  Downton Abbey Exhibit Details

Some of the Ladies of Downton Abbey: 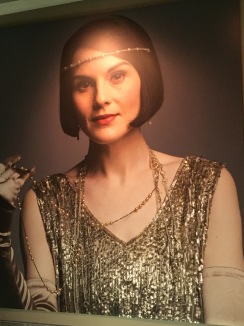 The exhibit uses large screen videos with Downton Abbey actors filmed at Highclere to immerse you in the castle and TV series. While not quite the same as an onsite visit to the castle, it does bring back many fond memories of the show. Memorabilia and costumes were on display with historical information about the history of England during the Downton Abbey period.

Some costumes on display: 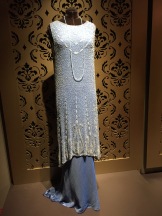 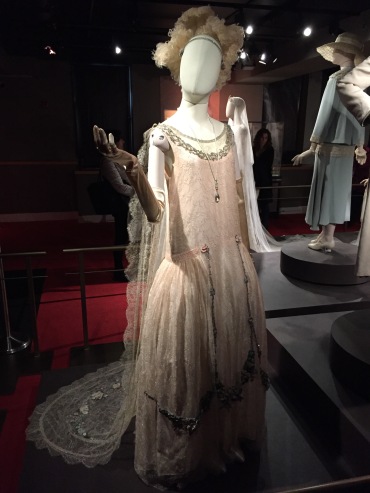 If you can swing a trip to London and drive out to see Highclere, they are open for tours during part of the year. We visited in 2011, and it was fascinating – an odd combination of a family home for the Earl’s family, a movie set, and a historic property visited by the royals. Plan a visit to Highclere Castle

If I’d been involved in script development for Downton Abbey, I would have written an episode to include ancient Egypt. Highclere’s cellar contains an Egyptian exhibit celebrating the 5th Earl’s discovery of the tomb of Tutankhamun with Archeologist Howard Carter in 1922.

And if you miss Lady Mary Crawley, I highly recommend the TNT TV series Good Behavior. Michelle Dockery plays the extreme opposite – an American sticky-finger ex-con who gets romantically involved with a South American hitman. She’s also in Godless, a new series on Netflix.

Karen Stensgaard is the author of the novel AQUAVIT, the first book in the Aquamarine Sea Series with a second novel underway. AQUAVIT is available as a paperback from Amazon and Ingram Spark or as an e-book from almost everyone else. Libraries have free access via Overdrive.  Link to free chapters on Amazon