Yes, the most famous vampire of them all, Dracula, has invaded Philadelphia’s museum and library, the Rosenbach! But not to worry, he isn’t sleeping in the basement in a coffin or roaming the upscale Rittenhouse Square neighborhood.

The original manuscript and early editions are part of a special exhibit to honor the 200th anniversary of the publication of Frankenstein in 1818. Bram Stoker’s masterpiece Dracula was published in 1897, about 80 years later, but just wait – the connection is coming. 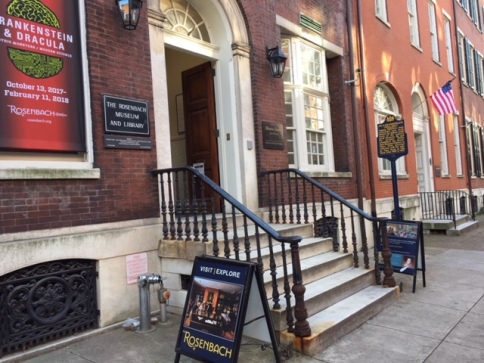 In the summer of 1816, a group of friends joined the poet Lord Byron in Switzerland for some R&R. With dismal weather keeping them inside, Lord Byron encouraged his guests to invent some ghost stories. Mary Godwin, later Mary Shelley, stressed over this but a nightmare led her to Frankenstein. Lord Byron’s physician, John William Polidori, wrote The Vampyre; A Tale. This book was the first published vampire story, but folktales had long included vampire creatures. If an Indonesian volcano hadn’t disrupted Europe’s climate, these stories might never have been written.

Fears of an Electrifying Future: 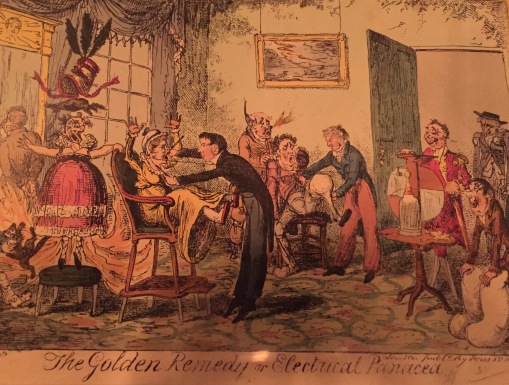 The drawing below was created by, or for, Sir Humphry Davy, a chemist and electrical experimenter in London in 1802. Sir Davy was a friend of Mary Shelley’s father, and she met him when a young girl. Davy’s ideas about animating dead matter through electricity may have lit her imagination.

Bram, short for Abraham, Stoker was an Irishman and never visited Eastern Europe or Transylvania, the setting of his most famous work and Dracula’s castle. However, Stoker did visit the area in England where Dracula had his casket shipped when the story shifts location. He would have known of Polidori’s book but conducted extensive research into folklore and myths and modernized the story. 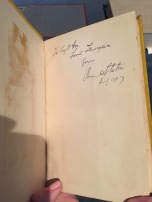 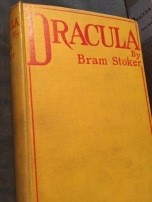 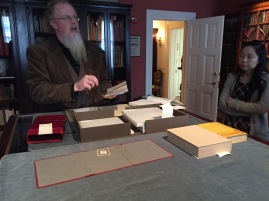 The Rosenbach owns some of Stoker’s notes and character sketches with his edits and notations, such as the original title The Un-Dead, and first editions. Special tours give visitors an opportunity to see these unique documents. The Rosenbach’s Frankenstein & Dracula: Gothic Monsters, Modern Science exhibit ends February 11, 2018.

Karen Stensgaard is the author of the vampire-free novel, Aquavit. But the second book in the Aquamarine Sea series may include one! AQUAVIT is available as a paperback from Amazon and Ingram Spark or as an e-book from almost everyone else. Libraries have free access via Overdrive.  Link to free chapters on Amazon