Recently several friends traveling to Copenhagen, Denmark for the first time asked me for suggestions. Since my husband is Danish and his family lives in Denmark, I visit at least once a year. I’m sharing some of my favorites places and different things to do and eat with you. Since I have lots of fun ideas, I’ll have a few more posts later.

If you have limited time, only a day or two and if it’s your first visit, I suggest buying a pass on the hop on/off bus if they’re running. I know this sounds cheesy for an I’m-not-a-tourist traveler, but with your limited time and for convenience, this will make it much easier to see more. While I haven’t ridden the double-decker red buses in Copenhagen, I have in many other cities, including Athens and Oslo this year, and it’s ideal for a quick orientation.

You can use Copenhagen’s bus and Metro subway lines instead of the hop on/off bus, but it’s more complicated. In June, some tourists were on the city bus with us trying to go to Malmö, Sweden, and the bus driver was taking them the opposite direction to the little mermaid. Taxi cabs are expensive so avoid them when you can.

My favorite place in Copenhagen must be postcard-perfect Nyhavn, which means New Harbor in English. But new in Denmark isn’t new for most of us. This area and some buildings date back to the 17th century. The focus is on the narrow active waterway for boats lined on either side of the street called Nyhavn with storybook style buildings. Hard to believe not that bsck in the 70’s this place was run down and dangerous.

Nyhavn on a Rare Hot Summer Day in June

Nyhavn is located near the Metro station Kongens Nytorv (King’s New Square) and stop three on the hop on/off mermaid tour. You could also walk there in about a half hour from the central train station or Tivoli through the Strøjet, the car-free walking streets.

When you get to Nyhavn, there are plenty of restaurant options lining the canal on the north side, but most of these are overrun with tourists particularly in good weather. And in all types of weather, there are blankets placed on the chairs for customers to ward off the Nordic chills. On the south corner, the baroque Charlottenborg Palace houses a contemporary art museum.

So, you’re starved. What do you do? Try a Danish hot dog! Even if you aren’t fond of the taste of American style hot dogs, they are so loaded with remoulade dressing, catsup, fried onions, raw onions and even some healthy cucumber slices; you won’t really taste the hot dog part. So be brave and belly up to the stand at least briefly, and order in Danish “ristet hot dog med det hele.” If they don’t understand your Danglish, try again: grilled hot dog with the whole thing. The traditional drink to wash down the hot dog is called cocio, a cold chocolate milk. Don’t ask me why but either go Danish or American with a coke or bottled water. 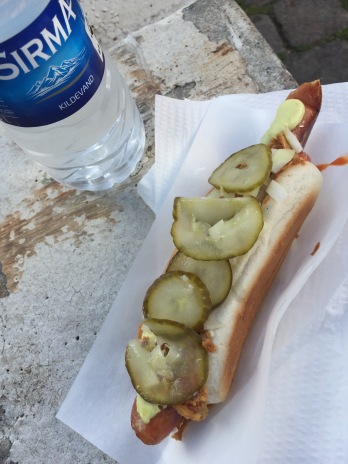 Now that you’ve rejoined the living with more stamina wander down the canal along Nyhavn to Copenhagen’s Inner Harbor and back up the other side. Stop outside 67 Nyhavn to pay your respects to Hans Christian Andersen, the author of the Little Mermaid fairy tale, who lived there until 1864. His former home is easy to find with a plaque on the building.

If you need something to get rid of the hot dog onion taste, get a waffle ice cream cone at old-timey Vaffelbageren, the Waffle Baker, at 49 Nyhavn. Licorice ice cream is a popular flavor. Ice cream cones are also filled with extra toppings – whipped cream and jam.

Don’t even consider trying to stay on a diet. Remember we haven’t even gotten to the Danish pastry known in Denmark as Vienna bread. Put that idea back on the “when I get back home” to do list.

To rest up after the strolling around workout particularly if you are jetlagged, take a boat ride around the harbor. The ticket desk is right behind the big anchor in the photo below. Different boat tours are available, including one with live jazz that I highly recommend. But for a newbie, consider the more educational narrated tour in English. If the weather is bad, which unfortunately may be the case, they have glass-covered boats. So, no more excuses. Get out on the water and explore!

The Anchor with Boat Ride Ticket Office in Back

Copenhagen has boats as part of the city’s bus system, but again they don’t go everywhere, and you will miss out without a tour. Highlights along the inner harbor include sailing through Christianshavn and seeing the ultra-modern Opera House and Black Diamond extension to the main library. Every year the waterfront changes with more buildings, renovations, and condos.

A scene in my novel AQUAVIT takes place in the Nyhavn area and other spots in Copenhagen. But it’s November in my book, so it’s not going to look like these June photos. Even though my book is fiction, many of the places I describe in my book are renamed but real. Here’s a link if you’d like to check it out: My Novel AQUAVIT

So, this is enough fun and food for now until my next update. As they say in Danish, på gensyn.  Karen