Last night I visited the new Amazon bookstore located on the third floor of the Time Warner Center at 59th street on the Upper West Side of NYC. Yes, a real store with paper books. But Amazon isn’t turning their back on their ebook business with many types of Kindles for sale too.  Per the friendly sales rep, they have books available for sale to the public at seven physical stores now.

Many of the books at the Amazon store were what I would find at a local Barnes & Noble, but it’s a smaller store and selection.  I expected most of the books to be paperback indies only available through Amazon and self-published but most were from the large publishing companies. The Amazon bookstore uniquely indicates Amazon’s average rating and the number of reviews for most of the books except the new ones. 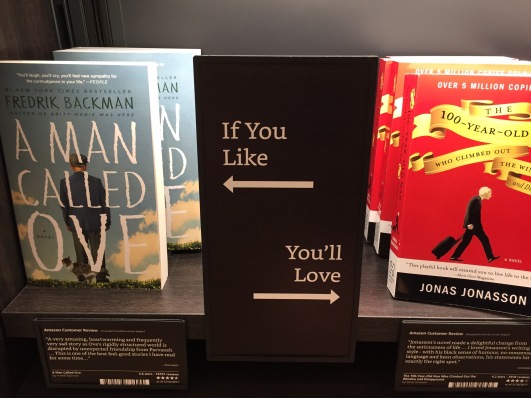 Amazon Book Recommendation (You Might Even Love AQUAVIT too!)

Amazon’s store is worth a visit even if you just want to see the view from the 3rd floor of the southwest corner of Central Park and Columbus Circle with the statute of Christopher Columbus. And here’s a bit of trivia. Even though I’ve heard Columbus Circle is not the exact geographic center, this is the location where all measurements from NYC are made. So, you could say that Amazon’s bookstore is at the epicenter of New York City.

Will my Amazon paperback novel AQUAVIT get a magic ticket into an Amazon bookstore?  The sales rep referred me to an Amazon PR email to find out. My little under-the-radar book probably needs a few more thousand sales and 100+ online reviews, but I’m politely waiting. If I do get invited you will be the first to hear!

Books That Hit the Big Time on Amazon

Wouldn’t it be nice if AQUAVIT was eventually included in the Amazon store display above? Many of these books had sales bubble up when they became films or TV shows to answer the age-old chicken-egg question. Was the book better than the movie?