Yeah, we’re talking about personal hygiene. Wearing deodorant is like brushing my teeth. Something automatic that I do every day. And if I happen to run out, I borrow my husband’s and buy one. This never makes the to do list. It’s bought that very day.

But this isn’t the way the world works as I recalled last week. I was riding the subway, and New York City was in the midst of another heat wave with 90-degree weather coupled with unbearable humidity. And as the temperature mounted, the odors got worse. Sometimes I wonder who lives with these non-deodorant wearing slackers, and why someone hasn’t said or done something. It can’t be the money holding them back since a deodorant costs about the same as a subway ticket.

Many moons ago when I managed an internal audit department, we hired our first summer intern. My team was thrilled to have someone help us, and we swore we’d give him some challenging assignments to use his brain and not the typical paper shuffling busy work.

I can’t recall his name or exactly where he was from, but it was a country that while not off limits to travelers isn’t on the radar for many Americans. My team was an ethnic mix-mash of Americans from Spain, Russia, and Africa, so another foreigner was more than welcome. For the sake of this story, I’m going to call our intern Naseem.

We assigned Naseem a cubicle to use for his three days a week schedule and got him involved with the firm’s internship program and benefits. But then we noticed something amiss. Even when Naseem wasn’t in the office, like a ghost, he lurked around the following day in his cubicle. You see, his odor, a miserable combo of sweat and spice, lingered in the air.

We held an informal group meeting to figure out what to do. The smell was so bad we were concerned about having Naseem wander through the office and trading floor and being sequestered for longer periods in meetings. Everyone with a functioning scent of smell would want to avoid him. Not only would this affect Naseem’s ability to find friends, but his career aspirations were now on the line.

Action must be taken, but what? We considered our options and as any good internal auditor preparing to do something new we did some research and googling. One of the online suggestions was to tell HR, but we immediately vetoed that option. This might leave a stain in his HR file or affect his internship, and besides, we were dealing with a real Catbert personality.

After that dead end, what else was there to do but ask someone you know and trust. So that night I called my dear ole Dad in Texas for his advice. He’d managed hundreds of engineers and employees in his division and traveled all over the world. Texans know real heat and humidity. How about 100 straight days of over 100-degrees? Deodorant wasn’t optional equipment down South.

Dad advised, “Buy him a strong anti-bacterial soap and a good strong deodorant/ antiperspirant. The spices in the food he eats sweat out through his pores, so he needs to shower with a good strong soap, and then apply the deodorant to handle the sweat during the day.”

With strong soap and deodorant in hand, my audit team debated who should be the messenger. We voted on Mark the most senior guy in the group who was also mild mannered and easy going, and he agreed to take on this odd but necessary conversation.

The next day on Naseem’s day off, we eagerly piled into Mark’s office to hear how it went. Mark said, “I showed him the deodorant and soap, and he took notes.”

“But what happened to them?”

“Aargh. Give’em to me.” I stuffed them back into the paper bag, wrote Naseem’s name on it, and stuck it in his cubicle.

Whether Naseem used our freebies or not is unknown. But what did happen was the rank smell disappeared, and our intern was a huge success. I wish Naseem all the best. He may be a manager at a company somewhere in the States or back home. Nassem may even be handing out soap and deodorant to help his staff along.

I hope this blog hasn’t offended anyone. But if my true story helps at least one person deal with a heated and unpleasant situation, it was worth sharing. 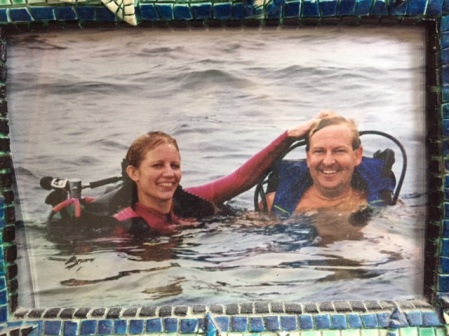 P.S. This story has absolutely nothing to do with my novel AQUAVIT. Well, maybe a little – New York City and me. If you want to learn more about my book, here’s a link. Aquavit on Amazon

Plan B: becoming an Atlantic swimming large mermaid. Room for extra plankton. #lovemermaids & mermen! #foundamoreaffordablewaytoliveinlalaland
Not the sunset I was hoping for but a beautiful palm night. Thank u Carlsbad, CA! #lovecalifornia 😘
Madly in love? Graffiti messages at Luke’s Falls, Lehigh State Park in the Poconos. And yes, per my college linguistics professor, graffiti is a language worth studying even in the public bathrooms! #SecretLoveNotes
Beautiful but hard hit NYC is getting back to normal. Springtime, when life returns, encourages us all. #HeresToLife
Leon creek turtles on a log. Socializing! 🐢🪵🥰
Great advice for 2020 but never too late! #GreatAdvice
Ok, Got the message, but maybe not on March 15, the dangerous Ides of March.
Texan skies can be so surreal. This one looks like a mermaid holding a torch with a brilliant light on her other side. #Mermaids
Stumbled upon a pretty stream in Bristol, VA bordering Tennessee. The Cherokee Indians had a village in the area on the canebreaks (stream valleys & ravines in grassy thickets). They wouldn’t recognize it now with I-81 crossing ahead.
Proud of my Oz-like city of Philadelpia. I wonder where the wizard is hiding. Not a bad guy after all. 💕
Sometimes I feel stuck like this branch, but see the seagull? Hang on for a friend or a bright idea!
A Central Park landmark - the Bethesda fountain’s statue “Angel of the Waters,” represents health, purity, temperance, and peace. And designed by a woman in 1868!