Prescott, about an hour drive north of Phoenix, is officially named Arizona’s Christmas city. The Mile-High city has many Victorian buildings, and now in its 64thyear, a million lights adorn the Yavapai County courthouse grounds for the holidays. The Yavapai, meaning ‘people of the sun’, were the first Native Americans to call this area of the country home. Next time I’m there, I must stay a night to see it all illuminated.

The local Monday Club (part of the American Federation of Women’s Clubs) received a Carnegie grant in 1899 but suffered from the devastating fire along with much of downtown Prescott in 1900. These women didn’t give up. They were determined to bring some culture to the town outnumbered by rough men referred to as “mostly un-curried, un-married, un-churched and un-washed.” 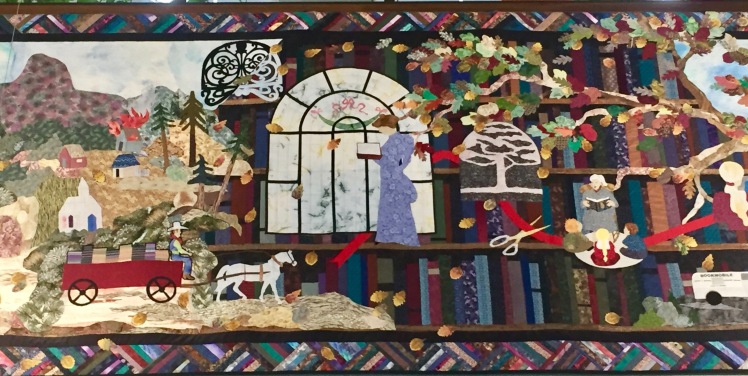 The Carnegie library opened in 1903, but the library moved to a larger facility a few blocks away in 1975. The former Carnegie library building is well maintained and used by local businesses. Saved from the wrecking ball! Librarian Anna Henry in  1916 inside the Carnegie Prescott Library.

A few special extras I haven’t noticed at other libraries included a long row of book club kits available for check out. Puzzles were also available to do in-house.

An extensive collection of katsinas (Native American dolls for ancestral spirits) were on display in glass cases on top of bookcases. But they didn’t seem too happy about being photographed! 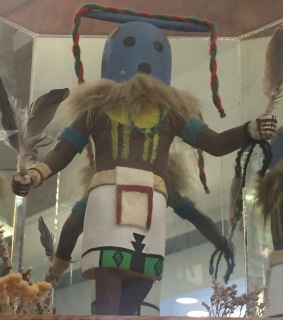 Also on display were sculptured sand paintings by Susan Popko:

In the library’s stairwell, a prelude to modern Prescott. Murals by Paul Coze: 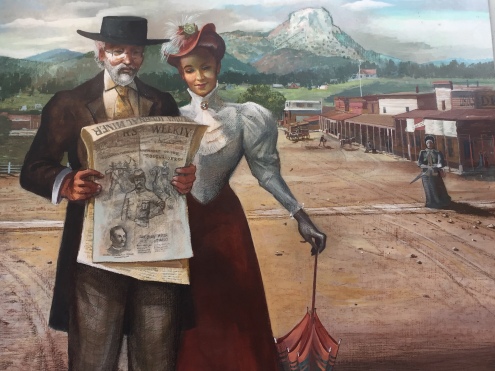 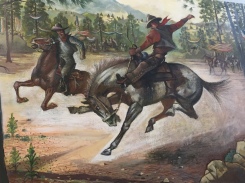 The town square around the courthouse has many historical buildings including several old hotels. A statue in the square commemorated the U.S. volunteer cavalry serving with Teddy Roosevelt’s rough riders.

A very Arizona quote from Andrew Carnegie: “A library outranks any other one thing a community can do to benefit its people. It is a never failing spring in the desert.”

Small wooden box with a ♥️ in Lübeck Germany. For secret romantic messages? #lüvinlübeck #thesuspenseiskillingmesoftly
Paddle boarding looks like a great way to go sightseeing. So popular in German island towns - social distanced so masks are off. #supercool #waterwaysbeatsidewalks
Beautiful old sailing ship in Copenhagen, 🇩🇰 Denmark. The Summer of ‘21 when ships return to sea.
Ahhh, a breath of fresh air atop on an old 18th century Danish lighthouse. The land beyond the watery blue is Sweden. #myancestorsarecallingmyname
Vintage vacation poster on the north coast of the Danish island called Sjælland. Head North from Copenhagen & stop when you hit the water. Charming, historic and popular beach town. #summerindenmarkyeahman
Seeing this repeatedly on Broadway today - a former Native American trail. Thanks 😊 to whoever! #inspirationhelpsbigtime
Plan B: becoming an Atlantic swimming large mermaid. Room for extra plankton. #lovemermaids & mermen! #foundamoreaffordablewaytoliveinlalaland
Not the sunset I was hoping for but a beautiful palm night. Thank u Carlsbad, CA! #lovecalifornia 😘
Madly in love? Graffiti messages at Luke’s Falls, Lehigh State Park in the Poconos. And yes, per my college linguistics professor, graffiti is a language worth studying even in the public bathrooms! #SecretLoveNotes
Beautiful but hard hit NYC is getting back to normal. Springtime, when life returns, encourages us all. #HeresToLife
Leon creek turtles on a log. Socializing! 🐢🪵🥰
Great advice for 2020 but never too late! #GreatAdvice