Well, she’s not mine, but sometimes I wish I owned such a beautiful ship. And nothing beats dining on one with a view of the water and coastline on a sunny day. Ships and boats were busy running up and down the Delaware just outside our window in Penn’s Landing. We dined on a three-course brunch in the ambiance of an ornate wooden ship without leaving port. So if you don’t have time for a cruise or are afraid of being seasick, this is the perfect substitute and a real getaway if only for a few hours.

This Grande Dame has had more suitors and ports to call home than anyone I know. She even beats the multi-married Elizabeth Taylor. And she is easy to reach if you are in Philadelphia. Docked on the Delaware River in Penn’s Landing: East of South Street and Old City and South of the Seaport Museum.

She is called a Barque with four towering masts and a steel hull. Built on the River Clyde in Scotland with three other sister ships in 1903, she is the largest original Windjammer still afloat. That deserves a toast: cheers!

My not yet published novel, Aquavit – Water of Life, tells the story of a woman who wants to escape from modern life on board an old ship not much different from this one. But her dream ship is called a clipper and at least fifty years older and must rely on sail power only since it doesn’t have engines.

When so many old ships have been decommissioned, sunk, or scraped, it is a real testament to her strength that she survives. Lucky for us, she’s open to visit for the cost of a drink or meal. And best of all, to wander and imagine what it must have been like to be at sea.

Moshulu was launched in 1904 in Hamburg, Germany and christened Kurt after her German owner. Not quite a feminine name for a lady but at least she was commissioned. Hard-working and in demand, she transported coal, nitrate, coke and patent fuel all over the world.

In 1914 she was in Oregon and seized when World War I started in 1917. Now an American ship, she was renamed Dreadnought, but there was ship already with that name. So she was renamed Moshulu, a Seneca Native American word. Both names mean ‘one who fears nothing.’

She was sold to Finnish owners in 1935 and captured by the German Nazi’s during World War II. After the war, she traded hands and was owned by Norwegians, Germans, Swedes, and Finns. Finally, in 1970 the American Specialty Restaurants Corporation bought and financed her new reincarnation as a floating restaurant.

Back in the day at sea with full sails in all her glory. (Photo of a photo onboard.) 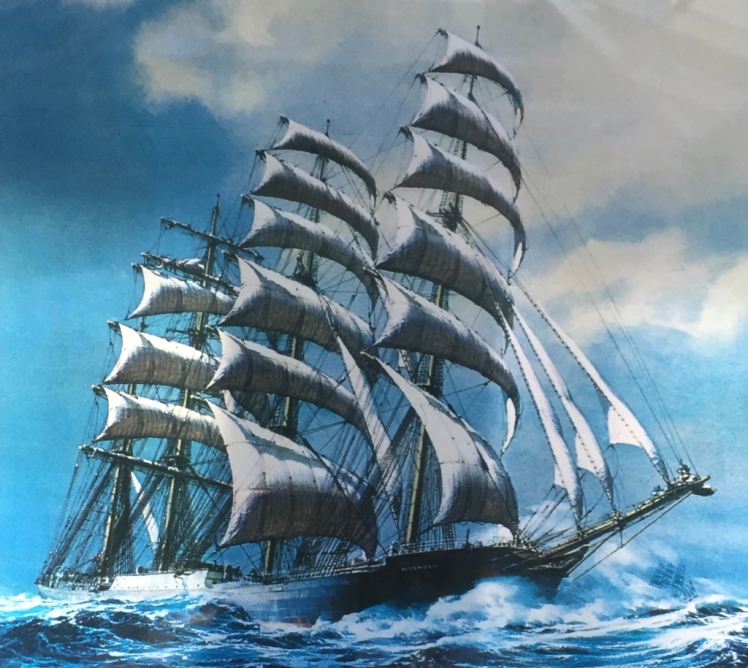 Here’s a link to Moshulu’s website with menu info and more. http://www.moshulu.com

I had the steak tartar appetizer and shrimp and blue crab enchiladas. The dessert table will erode even the best attempt at self-control. (See photo below with my appetizer. I’m holding a copy of the one of the books available onboard – details below.) 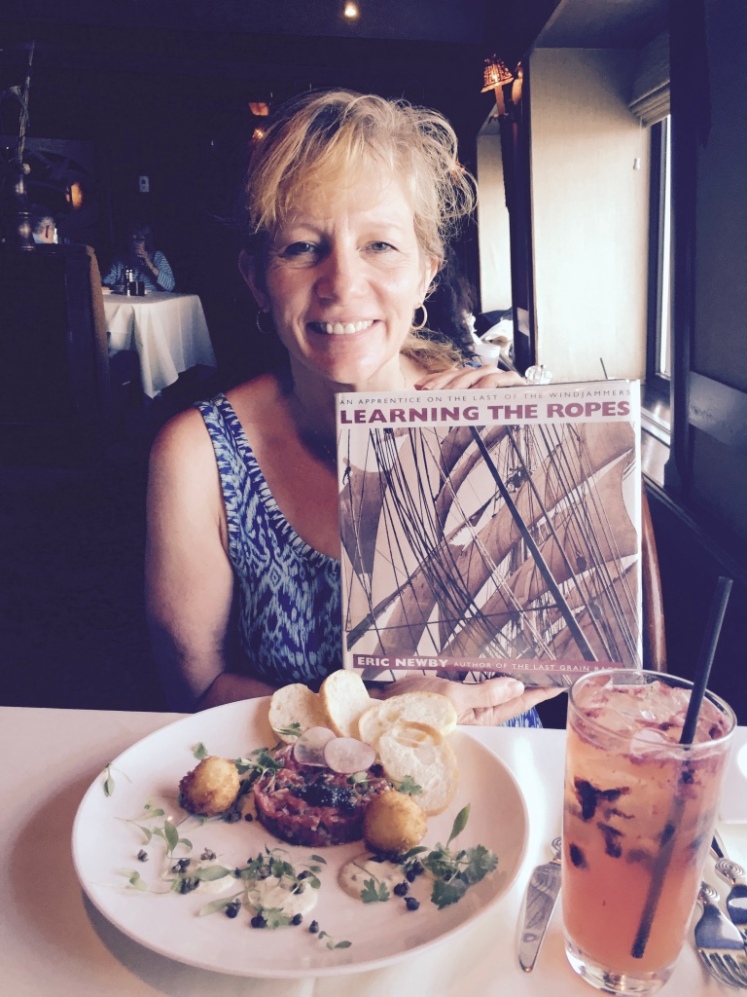 I hope this makes you want to visit the Moshulu. And maybe I’ll see you there!

Link to two books written by a sailor, Eric Newby, on board back in the 1930’s: