Mark your TV watching and recording calendar! Escaping the Madhouse: The Nellie Bly Story is premiering on Lifetime on Saturday night (Jan 19, 2019) with repeat showings over the next two days. Curious? Check out Lifetime’s short trailer: Link to YouTube

Actress Christina Ricci plays the true-life role of Nellie Bly, one of the first women investigative journalists. The role of the villainous evil nurse is played by Judith Light. Helen Childress wrote the screenplay, and the director is another woman, Karen Moncrieff.

Add to the mix an ominous setting – a 19th-century lunatic asylum on small Blackwell Island across from Manhattan in the East River. But all that remains today is the rehabbed Octagon House. The Lunatic Asylum and Octagon house in 1893 (photo from Wikipedia): 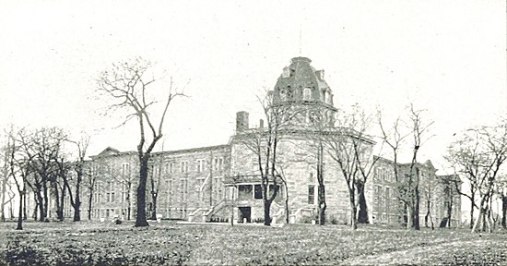 Blackwell Island may sound vaguely familiar to New Yorkers. There’s a reason – it was renamed Roosevelt Island in 1973 and is accessible via subway, bus, or an aerial tramway from E. 59th St. A fun way to visit! (Combine with a stop at nearby Bloomingdale’s.)

The Museum of the City of New York had a special exhibit on Rebel Woman in the Victorian Days. They included Nellie Bly, but it ended recently.

Nellie Bly was the pen name of Elizabeth Cochran Seaman, a restless 19th-century journalist who exposed the notorious Women’s Lunatic Asylum in New York. In 1887, she convinced a New York City newspaper this was worth doing. She faked mental illness to be institutionalized and report on the real conditions inside. Nellie Bly post-mad-house, an 1890 photo from the Library of Congress’ collection:

The movie fictionalizes some of the actual events surrounding Nellie’s stay. Per the film, poor Nellie loses her memory after the horrific ‘medical’ treatments and more complications ensue. Luckily, the real Nellie made it out intact, after help from her newspaper. She wrote the news article exposing the negligent asylum and a book – Ten Days in a Mad-House. 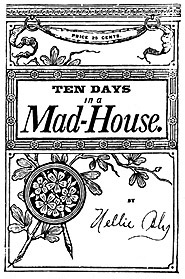 Her report and book caused embarrassment to those who should have known and drove home results. A grand jury investigated.  The budget of the Department of Public Charities and Corrections was increased by $1 million, and they echoed her recommendations. We need more Nellie’s today!

You can buy her books on Amazon, but since they are out of copyright, you can download them for free on Project Gutenberg. Link to Works by Nellie Bly

Both of my novels in the Aquamarine Sea Series (Aquavit and Blueness) were inspired by Nellie Bly and her books, Ten Days in a Mad-House and Around the World in Seventy-Two Days. Effective today, Amazon price-matched Aquavit (ebook only) to free. But hurry, Amazon controls the pricing! Link to Free Aquavit!